Almost Famous writer/director Cameron Crowe was at one stage, a teenage rock journalist for Rolling Stone magazine, and his inside knowledge of the subject matter infiltrates every aspect of the movie, resulting in a charismatic intriguing film which keeps its audience spellbound from beginning to end.

In Almost Famous, fifteen year old William Miller, played with an engaging raw innocence by Patrick Fugit, manages to hustle an assignment from Rolling Stone magazine to write a feature article on up and coming band Stillwater.  After hiding rock albums from his ‘rock is evil’ mother for so long, William is suddenly thrust into the heart of rock and roll in the seventies as he hits the road to join the band Stillwater on their tour. 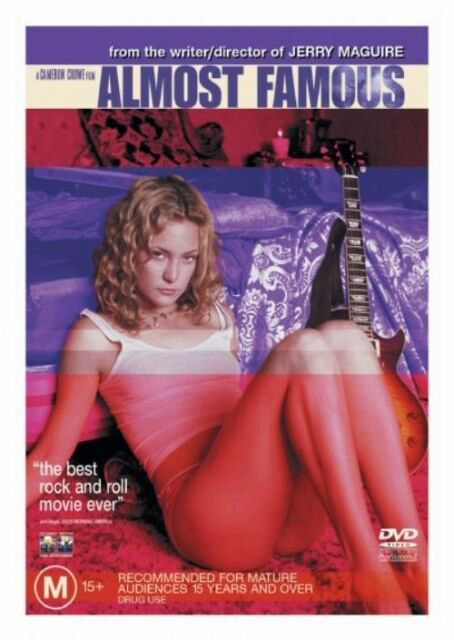 Struggling to find the story for Rolling Stone as he oscillates between being a fan and a journalist in the midst of taking ‘don’t do drugs’ phone calls from his protective mother, and ‘just make us look cool’ comments from the magnetic lead guitarist,  William turns to his cantankerous mentor, rock purist Lester Bangs.  Played with unbridled passion by Philip Hoffman Seymour, Bangs barks at him “You cannot make friends with the rock stars.  These people are not your friends!”

During the excitement of the tour,  a besotted William watches on hopelessly as the elusive and very alluring elite groupie Penny Lane (Kate Hudson) puts her heart on the line in a romantic tangle with married lead guitarist, Russell (played by the magnetic Billy Crudup).

A cross between a coming of age story and a tribute to the days where the essence of rock and roll meant something, Almost Famous, uses a dazzling cast, character driven story, and Cameron Crowe’s priceless rock experiences as a rock journalist in the seventies, to bring home the bacon with a triumphant bang!

Other films written or directed by the unstoppable Cameron Crowe: