Set in the California surf culture over a twelve year period in the sixties and seventies, Big Wednesday follows the lives of three surfer buddies whose lives are in the midst of massive change.  It has been described as an accurate depiction of the surf culture in California during that period, which is not surprising given Writer/Director John Milius was a surfer in Malibu. 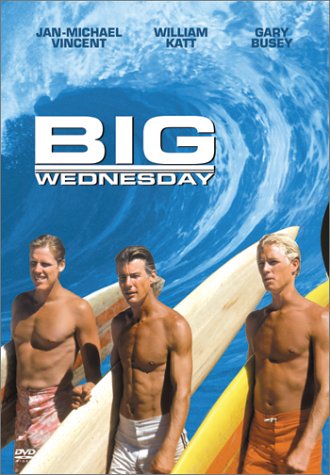 In an IGN interview, John Milius admits that many of the things that happen in Big Wednesday are taken from his real life experiences.  Maybe that’s why the film is so believable.

I had the pleasure of first seeing Big Wednesday at Cape Paterson Life Saving Club in Victoria, Australia when I was a young teenage girl.  I still remember the goose bumps I got as  the man known only as Bear makes Matt, played by Jan Michael Vincent a special board in expectation of a rare twenty foot swell hitting the Californian coast.  The soundtrack is stirring and depicts the mood to perfection.  You don’t need to like surfing to fall in love with this film. It is a story of growing up and accepting that change is a part of life.

Although Big Wednesday was considered a box office flop due to the harsh reviews of critics and what many consider a really bad trailer, word of mouth spread as people rented the video in droves and it became an absolute cult classic over time.  The film really was far better and more intelligent than the trailer depicted.

The question is “why does this film resonate with so many people?”  I think it’s because we see a bit of ourselves in all of the characters, we all have a bit of dreamer and hero in us.  We all have our weaknesses and struggle internally and externally with the choices we are forced to make in life.   Each character in the story could be you, someone you know, someone you admired, and someone you loved.

Big Wednesday is a film that truly connects with its audience and hits smack on many universal truths that run deep within us all.