Leonardo DiCaprio is brilliant in his role as hardened diamond smuggler Danny Archer, who unites with African fisherman Solomon Vandy on an extreme quest to find a hidden blood diamond in poverty stricken Sierra Leone.  These desperate men both have their own unique motivations to gain possession of the diamond, for Danny, it is both greed and to escape this war ravaged zone, and for Solomon, it is to find his family.

Soaked with gut wrenching scenes of the atrocities of war, unbridled greed, fierce love, and unstoppable determination, this movie takes viewers on a gripping and powerful journey which is poignant, electrifying and educational.  Those who were previously not aware of the violence and slavery revolving around illegally mined diamonds to fund rebel warfare will certainly be woken from their slumber by this movie.  While Dounsou contributes an impeccable performance as Solomon, it is Di Caprio who gives the performance of a lifetime as he slowly fights his own greed and emotions to the point where his actions reveal he is not completely without mercy. 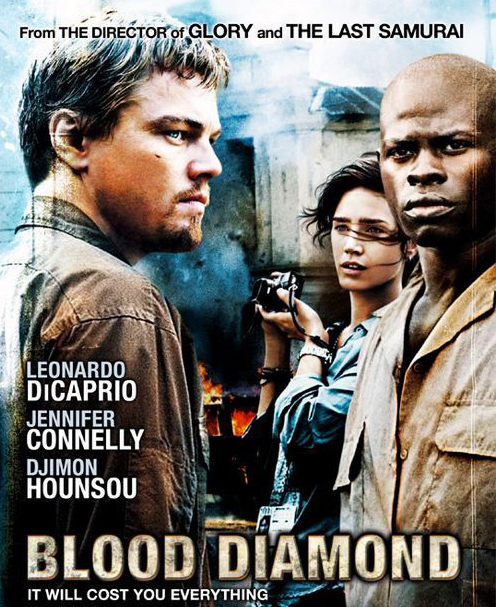 It is the viewer’s hope that Di Caprio’s character Danny Archer with his swagger and brimming confidence will crack and show something more than the brutal lusty self-serving traits that initially characterize him.  We all want to believe that there is always some good in everyone, and every human has the capacity for empathy and kindness.  Quietly, we plead for some slivers of light to arise from Danny Archer’s character to symbolise hope for all mankind.

The battle Danny Archer wages within himself between being somewhat ethical, or cruelly self serving, is demonstrated with ferocious conviction by Di Caprio.   Director Edward Zwick has admitted that Di Caprio and Hounsou gave themselves so utterly to their roles that the film actually took a physical toll on both actors.

It is hardly surprising Blood Diamond got five academy award nominations including Best Actor and Best Supporting Actor; it deserved every single one of them.